Well this weeks meal looked very appetising, but the taste didn't quite live up to the expectation.

We had shepherds; or was it cottage; pie.  (The Rugby Ref never asked if it was beef or lamb.)  Along with a big chunk of lovely fresh bread.  The potato on the top, with a bit of cheese, was lovely.  Inside it was mince and vegetables, mostly peas and carrots.  It looked home made and the portions were very generous.

There was just something about the mince.  The chili in meal No1 was the same.  The mince was tasteless, which you usually find with very cheap mince.  Actually it wasn't totally tasteless; it tasted a bit like cardboard.

Now The Rugby Ref isn't going to castigate clubs for buying cheap mince.  They are working on a shoestring budget and need to cut corners where they can.  But it does affect the score The Rugby Ref will give them.

The Rugby Ref is going to score this meal one higher than the chili in meal No 1, because the vegetables were very nice and the potato and cheese topping was lovely, so The Rugby Ref scores this meal 6 out of 10. 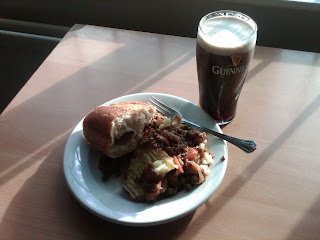