The Rugby Ref's changing room, No 6.

Sunday afternoon.  2nd XV Cup.  Nice little club, running on a small budget, but they still have a referee's room.  The clubhouse is shared with a cricket club, which explains why the referee's room is full of white umpire's coats, wickets and bails.  The room is small, has its own shower, but no toilet.  The Rugby Referee gives this changing room 6 out of 10. 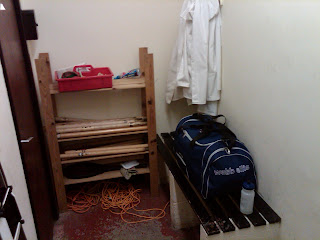 The Rugby Ref's changing room, No 5. 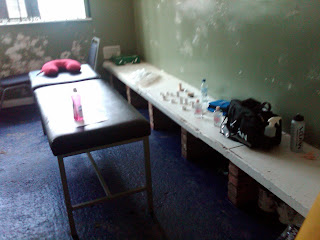 Rugby needs ref's - it could be YOU!

The game of Rugby always needs more referees, have "YOU" ever thought of becoming one yourself? 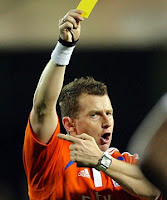 Maybe your playing days are nearing the end, but you still want to stay involved in the game?
Maybe you want to put something back into the game?

Maybe your kids have started playing and you want to be involved with them?
Maybe you aspire to reach the top in rugby refereeing?

For more advice on how to start refereeing or choosing an appropriate course, you can contact a member of the RFU referee development team, by following THIS LINK. 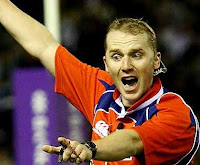 The Rugby Ref started off helping the coach for his son's team, at his local club.  The club then offered to pay for anyone who wanted to referee, provided they helped the club out at the appropriate age level.  The Rugby Ref volunteered and did an ELRA course (this was before the Mini-Midi course was introduced).  He then refereed his son's team before joining his local referee society and progressing to adult games.  The Rugby Ref likes doing courses and collecting qualifications.  The Rugby ref is now a qualified Society Touch Judge, a qualified Referee Coach and an RFU Referee Trainer.
For more information on getting involved in refereeing you can go to THIS PAGE on the RFU website, and watch the excellent "Get Involved In Refereeing" video.

You can also look at this booklet "Becoming an RFU Referee".

The Rugby Ref's changing room, No 4. 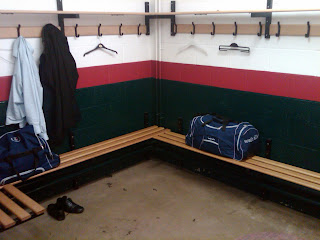 So The Rugby Ref had a pre-season selection game last weekend.  Four 20 minute quarters and an interesting incident that The Rugby Ref wants to tell you about.

Third quarter of the game, we are in broken play.  Black have the ball on the right side of the field when there is a turnover ball.  A Red opposition player ends up with the ball about 15 feet in front of The Rugby Ref at his 2 o'clock position. Play is fragmented with no discernible lines.

The Rugby Ref has spoken to other referees about this incident and it seems to be an increasing trend for players to use the referee as a shield between themselves and any opposition players.  This is a trend that The Rugby Ref is determined to stamp out.  From these other referees' comments it would seem that other referee's are of the same opinion.


"I had a few players run into me, or toward me this weekend ... is it a trend to use the ref as a shield"?
"Good for you. Too many players are using this as a deliberate tactic and have been in recent years".
"He saw you / was looking at you and adjusted when you moved... on that basis it was deliberate contact".
"In my opinion, from your description, he was using you to "snooker" the opponent behind you, keeping you between him and the opponent".
"Maybe he had been watching the tri-nations and thought to himself, I'll have a piece of that knocking the ref over action".
They all said "card him"!

The Rugby Ref's changing room, No 3.

This weekends changing room was at a club with a fairly new clubhouse, which they largely built themselves!  This is a good size changing room with its own toilet, shower, sink and a mirror.  It's private and the shower is hot and powerful.  The only downside is that the floor is bare concrete and the walls are painted breeze block.  The Rugby Ref knows from experience that because of this the room gets very cold in the winter.  Despite that The Rugby Ref likes this changing room and gives it 8 out of 10. 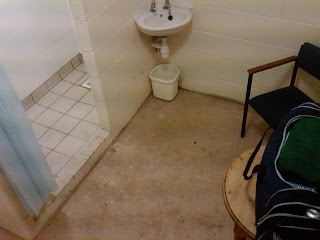