The Rugby Ref's changing room, No 1.

In what The Rugby Ref hopes will be a regular slot he is posting photographs of the changing rooms we ref's get given by clubs.

Last Saturday I did a pre-season 10's tournament, this is the changing room I used.  It's one of the better ones.  It looks pretty basic, but it has it's own showers and toilets, the water is hot and the room is clean and secure.  The Rugby Ref likes this changing room and gives it 8 out of 10. 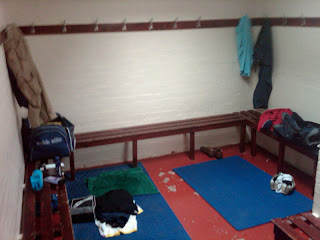 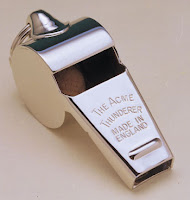 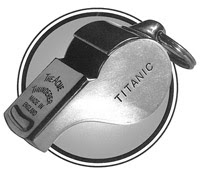 When The Rugby Ref started out as a referee he never really got any advice on what happens, or what to do on a matchday.  He was just told to be at Old Fartonians for a 3 o'clock kick off.

But what do you do? What do you take?  For new referees The Rugby Ref will tell you his routine for a Saturday League match, it will vary slightly for midweek games, but the basics are the same.

The Rugby Ref's routine really starts midweek when he gets the call from the home club to confirm the game is on.  The Rugby Ref will take this opportunity to confirm a few things.  He will have already checked these things online and in the Society hand book, but it never hurts to double check.
The Rugby Ref will also look at the club websites to see where they are in the league relative to each other and if possible what the result was last time they met.

Saturday morning, The Rugby Ref gets up and has breakfast.  Nothing too heavy, maybe some toast, cereal or some fresh fruit.  The Rugby Ref usually has some jobs to do Saturday mornings, given to him by Mrs Rugby Ref.  It's important to get these out of the way early as you don't want to be rushed in your preparation for the match.

The Rugby Ref will have checked the postcode of the club on google maps to see how long the journey will take, The Rugby Ref likes to be there one hour before kick off and doesn't like to be late, so this is important.  He will have also made a note of the clubhouse phone number in case he gets lost.

Late morning, time for The Rugby Ref to check his bag.  It is kept in the back of his car just in case he gets a call at work, to go to a midweek game short notice, but it is still worth checking.  So in no particular order:
There are a few other things lurking about in there like toiletries and old banana skins, but the important stuff is listed.

A little side note for the new referees first game here.  If you arrive at Old Fartonians to referee their 3rd XV, or extra C's one hour before kick off, you will probably be the only person there!  So leave it until about 40 minutes before kick off.

On arrival The Rugby Ref will seek out some official looking person from the home club and introduce himself, he will then drop off his bag in the referee's changing room and stick his head into the players changing rooms to see who has arrived.  At this point The Rugby Ref will remind the teams that he needs their team cards handed in before kick off.  Formalities out of the way, grab another Lucozade and sip it while having a walk out to the pitch to see what state it is in.  If anything obvious has been overlooked, like no white lines, a burnt out car in the middle of the pitch, or the posts have fallen over.  Now is the time to mention it, so the home club have time to do something about it.

With around 45 minutes to go The Rugby Ref will check that at least some of the away team have arrived, before he gets changed.  All ref's have their own little routine in the changing room.  The Rugby Refs is deep heat on the calves, one ibuprofen tablet, spare whistle and pencil in the right hand pocket, notebook and cards in the left hand pocket, watch on each wrist.  Pick up flags and water bottle and head out to the pitch with about 30 minutes to go.  If the teams are still in the changing rooms, find out what their plans are and where is the best place to do boots and the safety brief.  Most of the time this will be done on the field at around the 30 minute point.

The Rugby Ref will ask the Captain's name and introduce himself.  The Rugby Ref likes to be informal on the rugby pitch and allows the players to use his first name.  The Rugby Ref's first name is "Sir".  The Rugby Ref then asks what number the Captain will be wearing, so he will know where to find him should he want to have a little chat at any point of the game.  "Skipper shall we do boots and the brief, then you can get on with your pre-match?"

Get the players to line up on a convenient line and check their boots for sharp studs and edges.  While you are doing this keep looking up to make sure they are not running round and re-joining the line, otherwise it's going to be a long afternoon!

"Front row and replacements, 9, 10 and the Captain please".
"Front rows, at every scrum I will make a mark for the centre of the scrum.  You will only hear four words from me then, Crouch, Touch, Pause, Engage.  Please do each word as I say it, not before, don't try to rush me or race me.  Hold it over the mark until the ball is in, keep your feet out of the tunnel until the ball is in.  Clear? Good.
9?  stand on my right at the scrum, when I am happy I will step straight back, you will then put the ball in quickly and down the middle.  Quick taps, make sure you take them at the mark, or on a line behind the mark, make sure the ball leaves your hand or moves off the mark and always take it in front of me.  If I say wait, you don't take the quick one.  Clear? Good.
10? you are responsible for keeping your backs onside.  5m at the scrum, (from the back foot not the centre), 10m from the lineout.  You mark it out and get them set on you.  I will either give you a thumbs up or wave you back.  If I wave you back, I want you back at least another metre.  If the ball is held in the lineout I will raise my arm, keep your guys back 10m until I drop it.
Skipper do you want to come with me? we'll meet the away Captain and do the toss".

Once The Rugby Ref has both Captains together he will remind them of their responsibilities.  "Captains your team's discipline is your responsibility.  I expect you to deal with anyone trying to tell he how to do my job, keep the chat down and ensure all questions come through you and only when the ball is dead.  Can you do that please?"
We then toss the coin "kick or choose ends?" and I check whether the teams are staying out or going back inside.  At this point The Rugby Ref will hand both Captains a flag and ask them to find a willing volunteer to run touch, this should not be a sub or the coach.

The Rugby Ref then repeat the procedure with the other team.

You will notice that The Rugby Ref gets each section of players, including the Captain, to confirm they have understood what they have been told.  This enables The Rugby Ref to remind them of this if things go wrong.  "I asked you to do this before the game and you said you would, so what's gone wrong?"

After the game The Rugby Ref always applauds both teams off the pitch and makes himself available in the bar, should the teams or coaches want to discuss any aspect of the game.  The Rugby Ref is always happy to discuss the game and his decisions.  He also gets the teams' Captains to fill in his referee's report card and signs the score card.


NB: The Rugby Ref is aware that this is quite a long post and he may have skipped some of the finer detail for the sake of brevity.
Posted by The Rugby Ref at 01:12 No comments: