Speed Rugby - a new board game

The Rugby Ref likes a good board game, even more so if it encourages his kids to come off their Xbox!  So when he was sent a new board game about rugby, it ticked several boxes.

The game is called Speed Rugby and the box looks like this: 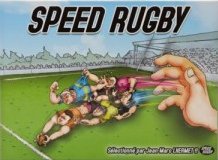 The Rugby Ref says it's a board game, it's actually more of a dice game.  Inside the box (which acts as a dice tray) there are six dice and some counters to keep score with. 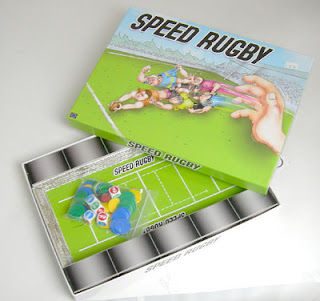 The game, like most good games, is very simple.  You throw five dice and this gives you the option of a Try, a TMO decision, a Drop Goal, a Penalty, or Play On.  You then throw the 'validation' die to determine the outcome of a TMO decisions or a Penalty.  That is your first half over and your opponent throws his first half dice in the same way.  You then reverse the process (opponent going first) for the second half.  Add the scores up and see who wins.  Blowing of The Rugby Ref's whistle while playing is optional!

That's why it's called speed rugby, it takes just a few minutes to play and is incredibly good fun.  Like The Rugby Ref said, the best games are usually the simplist.  The Rugby Ref really likes this game and highly reccomends it for rugby fans.

The Rugby Ref has just one critiscism, the game is essentially six dice.  You don't need all that packaging and you don't need the counters for scoring.  You can keep score on a bit of paper, or a beermat (standard rugby score values).

When The Rugby Ref was a kid he had a game called 'OwzThat', which was a cricket game in a tiny tin, consisting of two metal dice like rollers.  The Rugby Ref loved that game because it fitted in his pocket and could be played anytime, anywhere, in just a few minutes. 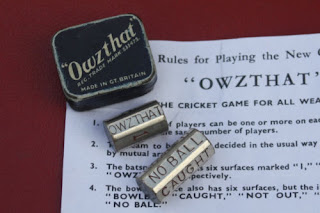 Speed Rugby could be just like OwzThat, put the dice in a little pouch, or small box, that fits in your pocket and schoolkids will take it to school to play in the playground; rugby players and fans will take it to the rugby club or the pub, to play while sat at the bar.

You can buy Speed Rugby from Amazon for about a tenner and there are several different versions available on the Speed Rugby website.

Ho hum, another week, another match, another curry.

It was a very nice curry, tasty, full of meat, choice of chips or rice, but the observant reader may have noticed a theme developing here.  Four curries in a  row now.  Another 7 out of 10.

The rugby ref didn't bother with a photo, one curry looks very much like another.
Posted by The Rugby Ref at 10:49 No comments:

Is a ref from France aloud [sic] to ref a game between Wales and France in a rugby world cup semi final?

Dan, Alain Rolland is a former Irish international and a member of the Leinster branch of Referees.

This week the rugby was a bit one way with a scoreline of 12 points to 122 points, but a very nice chicken curry afterward, with lots of meat in it.  Another 7 out of 10. 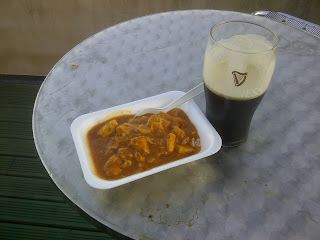 Picking up the ball in the ruck.

Hi again!
I'm not trying to find fault with the ref here, but I am wondering about players picking up the ball in the ruck and lunging forward.
If you are in the ruck, bound on to other players, then you are not allowed to use your hands. The common arrangement is for the half-back to stand behind the ruck, reach in, and get the ball. The half is not in the ruck, and is on his feet. Furthermore, he is standing behind the offside line (the last man in the ruck).
But sometimes someone in the ruck picks up the ball and goes forward. To me it is the last man, and when he releases his bind, the offside line moves ahead of him, and so he is entitled to reach down and pick up the ball.
Do I have this correct? Because I was looking at Ireland-Wales 50:31 of the 2nd half, and to me, the Welsh #5 is not the last man in the ruck, but he picks up and goes forward. Am I missing something?
Steve

You are absolutely correct, once a ruck has formed, players are not allowed to use their hands.  The scrum half is given special dispensation to put his hands in, to facilitate a better game of rugby.  But only once the contest for the ball is over.

If a player at the back of a ruck reaches down to pick and drive, this may not be strictly legal, but if the ball is already won and the contest is over, then the referee may let it go in the interest of keeping the game flowing.  Remember we don't want to blow the whistle unless we have to.  You have to ask yourself "is it a clear and obvious offence that prevented a fair contest for the ball?"  If not, play on.
Posted by The Rugby Ref at 15:40 No comments:

Can the panel provide an honest answer to the performance of Bryce Lawrence at the world cup quarter final. This would also have to include the asst refs. High tackles, hands in ruck etc etc. were SA fairly treated in this match or were there some other agendas here that the ref had to satisfy.
Rodney Watkins

Thanks for the questions, although there is just The Rugby Ref to answer it, no panel.

The Rugby Ref thinks that when Bryce looks back at the video of this game, he will probably acknowledge that he didn't have a "good day at the office".

However, he did treat both teams equally, he didn't affect the result of the game, and there was no hidden agenda.

So not his best peformance, but a fair result.
Posted by The Rugby Ref at 12:49 No comments:

The Long Throw In.

Saw this in the Canada - NZ game and there was no call.

The line-out had formed and Canada had the throw-in. The thrower made a long throw almost to the centre of the pitch and a back ran forward and caught it and proceeded up the field. Nothing wrong with that I believe.

But the throw was clearly not straight as the back caught it at least a couple of meters behind the line of touch. Was this just a missed call, or does the fact that the throw in went beyond the 15 m line allow this? I've reviewed Law 19, but could not note an exception.

The NZ commentators we get for the WC coverage were not amused!


Steve, thanks again for another great question.

What we need to know is, was the throw straight to start with, as it passed along the line of touch, between the two sets of players?  The Rugby Ref is going to assume it was, since the referee didn't call it not straight?

As you correctly believe, the throw may go beyond the 15m line, but can it be called "not straight" at that point?  Lets look at the relevant law:

So once the ball has travelled past the 15m line, the lineout is over.  As long as it was more or less straight up to that point, we are fine.  So in the scenario you witnessed, the referee was correct to let it go.

Steve, don't pay too much attention to the commentators.  They are not hired for their law knowledge, although it wouldn't do them any harm to complete a referee's course would it!
Posted by The Rugby Ref at 16:53 No comments:

Out of county league match this weekend for The Rugby Ref.  Very nice club, good rugby setup.
The meal was another very nice curry, lots of meat and vegetables, lots of flavour, all accompanied by a nice pint.  The picture doesn't really do it justice.

The Rugby Ref gives this meal the same as last week; 7 out of 10. 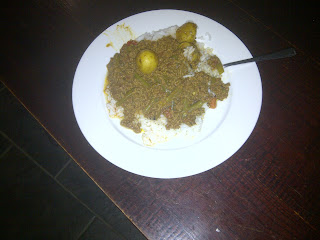