After a couple of months off The Rugby Ref is back on the pitch.
First match of the new season was a (ahem) friendly!

So the first game was followed by a bowl of chili, a large chunk of fresh bread and some Indian appetisers.  All washed down with a pint of Guinness.

The chili was ok, but it was just chili, made with mince.  The appetisers were over cooked, but the bread was really nice.  Let's face it, after a rugby match any meal is good and a hot meal is even better.  It's difficult to give this meal a score as it is the first one, but based on past seasons The Rugby Ref is going to score it 5 out of 10. 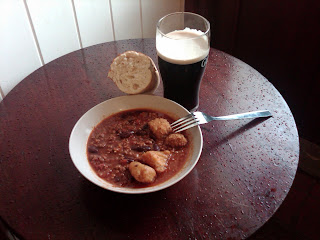