Hi, I saw your blog and wonder if you'd like to weigh in on an event that happened to me on Saturday?

Lineout, red throw in and the ball goes in not straight. The blue team throw up a jumper who stretches so far to get the ball that his lifters drop him cold on his back.

I gave a FK as a safety measure -  under 18 28 c) Lift or support a player from the same team. Players who support or lift a team-mate must lower the player to the ground safely as soon as the ball is won by a player of either team.

However the appeals were quite interesting. They agreed with the event, but suggested that because an obvious 'not straight' was the first offence and there was no foul play, that I should have ignored the player getting dropped afterwards.

Perhaps, in hindsight as 18 28 c) is intended to stop players being held up longer than necessary that they were right and that dropping your own player should be a PK under 9 11) Players must not do anything that is reckless or dangerous to others.

An interesting question.  What outweighs what when we have more than one offence.

Basically we have two events:
Throw not straight.  Line out or Scrum on the 15m line.
Player not lowered to the ground safely.  Free Kick.

You were right to use law 18.28, the key phrase being: "Players who support or lift a team-mate must lower the player to the ground safely as soon as the ball is won".

This is in line with the new law on lifting a player in open play (9.26) which repeats the phrase above and also gives the sanction of a Free Kick.

So which offence takes precedence?

The Rugby Ref would suggest that the principles of refereeing should prevail.  Safety first, then Enjoyment/Equity, then Law.  Safety always comes first.  Although a Free Kick would usually outweigh a line out / scrum option anyway.

So if safety trumps law, then you should penalise the team not bringing their team-mate to ground safely.

Free Kick to Red.  However The Rugby Ref would have no problem with a Penalty Kick to Red for dangerous play.

5th game of the season

The changing room was great, own shower, nice and warm, drink and snack waiting...but no mirror and referee's are a vain bunch.  9/10 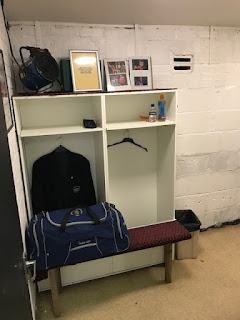 Good pint of Guinness and a lovely spicy bowl of meat and potato stew.  But again it came in those horrible foam bowls with a plastic spoon.  9/10 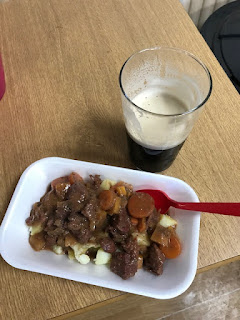 In Saturday's test between SA v NZ we again saw a penalty awarded to the attacking team on the tryline under the defenders’ posts with the attackers in dominant mood and possession. Somewhere in the pile up of players a defender was seen to be infringing the law and in doing so conceded a pretty certain 3 points, instead of a likely 7 points, behaviour that could easily be deemed a cynical offence given that  it saved 4 points. I am not referring to collapsing mauls after lineouts, a different matter completely, but the repetition of forwards’ throwing themselves at the tryline, with possession being retained for any number of times, invariably moving towards the posts in the process. Then suddenly, a penalty awarded against a defender - surprise surprise!

It happens too much in Super and Test rugby and is very seldom deemed cynical, yet the arithmetic makes such sense that it would not be surprising if it was an unspoken ‘nudge,nudge' coaching tactic that no-one could ever admit to. We’ve just had two 34-32 and 32-30 brilliant test matches, so these points saved are potentially match winning ones.

World Cup Finals are also won by 2 or 3 points, so this habitual offence could be noted, the rule book changed and coaches warned and the referees told that a penalty try for these infringements on or within a lock’s body length of the line, call it 2m, will be awarded.

Your thoughts on why this won't work would be appreciated by a bunch of us!

You seem to be asking The Rugby Ref to make a judgement on whether a particular law should be changed or not.  That is outside of the remit of The Rugby Referee.  The Referee is like a policeman in some ways, he upholds the law, but he doesn't make it.

There are processes in place that cover the situation described.  If foul play prevents a probable try then a penalty try can be awarded.  If there is persistent foul play then a yellow card for persistent offending can be shown.  This gives the attacking team a numerical advantage and they can choose whether to take the 3 points or keep attacking the goal line.  That decision is a tactical one, not a legal one.  There is risk and reward in both choices.  You may miss the kick?  You may spill the ball if you keep going through the phases.  Likewise for the defenders.  That is what makes rugby such a fascinating game.

Grounding the ball and Uncontested scrums

I was watching two games simultaneously this Saturday and have two questions;

First, the attacking team took a penalty kick at goal which fell marginally short, one of the defenders caught it with one foot in-goal and one foot in the field of play.He then ran to the 22 and took a quick re-start. My question is did the defender take the ball in-goal, so should it have been a 5 metre scrum, or was the referee right to allow the 22 drop out?

My second question from this weekend involves numbers in the scrum. In the game the team in blue had had a player sent off for a tip tackle so were playing with 14. A little later they needed to go ‘uncontested’ (I’ll not go into why, however it did look like gamesmanship), this is allowed in the competition rules without the need to ‘drop a player’, my question is twofold. Firstly should they have had numerical parity in the scrum? Secondly, if so in a lower level Yorkshire Merit fixture whose responsibility is it to make sure it happens? Should the referee know the competition rules or is it a Law, or should the opposing team have to ask for parity

All the best, as ever,

13.  If any part of a defending player is in in-goal, that player is considered to be in in-goal, provided they are not also in touch or on or over the dead-ball line.

14.  If a player, who is in in-goal, catches or picks up a ball that is still in the field of play, that player has taken the ball into in-goal.

15.  Uncontested scrums as a result of a sending off, temporary suspension or injury must be played with eight players per side.


Thanks for the questions.
The Rugby Ref.

4th game of the season

A really nice changing room with it's own shower and toilet.  It only gets 9/10 though because when you step out of the shower you are right in front of a window that's opposite a window in the bar, with no curtain or blind. 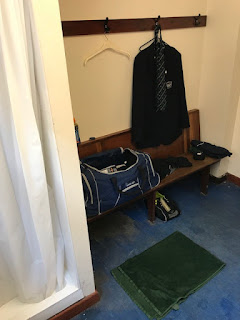 The meal was a really nice burger from a local butcher with a pint of Guinness.  Didn't get a picture because I was talking to the assessor for ages after the game. 9/10 also.