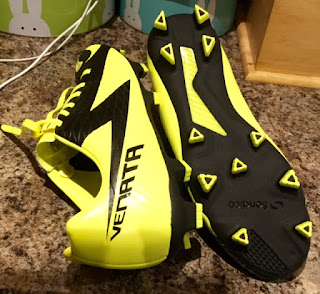 I’m a coach at an American high school. I think if I could coach a 2 man lineout (one lifter, one jumper), it would be an unstoppable lineout, as I don’t think anyone else would be able to safely do that lift. I’m thinking about having a prop lift a scrum half using this method I have seen in cheerleading.

Is that a legal lift?

Sorry, no, that is not a legal lift. The player is initially thrown into the air, not lifted or supported. They are then supported below the thighs in front.

Attacking knock on in in goal

I have a question regarding an attacking player knocking on while in goal - apologies if it has been asked before.

In the following situation, what do you believe the outcome should be?

Red are attacking and kick the ball into the opposition in goal.A red player (who is onside) knocks on when attempting to ground the ball.A blue defender then makes the ball dead.

My feeling is this should be a drop out rather than a defending scrum since red put the ball over the goal line, advantage was played and the ball was made dead.

There is no exemption in law to playing advantage in this case (8.3(f) only applying after the ball has been made dead), a drop out would be a clear advantage (assume blue have a weak scrum for clarity) and law 12.1(c) does not apply since the knock on occurred in in goal. Furthermore, if red had knocked the ball backwards in in goal, a drop out would be the only option (so red not knocking on might be a better result for blue, which seems wrong) and if 8.3(f) did apply, it would obviate the need for 12.1(c).

It seems simple to me, but opinions seem to be divided and I can find no IRB clarification.

The result of a knock-on in in-goal is always a scrum.  This is covered in the following specific laws:

If an attacking player commits an infringement in in-goal, for which the sanction is a scrum, for example, a knock-on, play is restarted with a 5-metre scrum. The scrum is formed in line with the place of the infringement and the defending team throws in the ball.

I understand where you are coming from regarding advantage, but we wouldn't play advantage in this situation.

If you think about it, the best the defending team could hope to get is clean ball from the back of the scrum and a clearance kick.  Does this equate to a 22 drop out?  No it doesn't, a 22 drop out would give the defenders too much advantage (specifically 22m worth of  extra advantage).

In addition if advantage was being played and the ball was made dead, then advantage wasn't called over, and you can't carry on advantage after the ball is dead; so we go back for the original offence and the scrum.

I am taking up rugby for the first time and have never played before. What is substitution in rugby and is it a bad position to play for a player as they most likely won't be playing the match would they? I don't want to end up in the substitution position and if I do will I be ended up here forever or will I earn a position in the game? Because when I get good enough at rugby I would love to play.

This would be more a question for a coach than a referee?

These local regulations are all designed to make sure everyone gets a game of rugby and are specifically designed to take away the need for a substitute to "warm the bench" all game long.  If a player is made to sit out the whole game over and again, he may leave and not come back, so a prudent coach will give all his players time in the game, to make it enjoyable for all.

If you are new to the game I would expect you to start off as a substitute, but if you do well in training you should quickly get some game time.  The better you do, the more game time you will get, but I would hope that you get to play whatever your skill levels as rugby is a game for all shapes and sizes; and all skills.

The same scenario  ,,this time defending team awarded penalty in goal ,,Are the attacking team to be 10 meters back from 5 meter line ( effectively they are penalised back 15 meters )

Am I correct with above view

LastlyMark made in goal ,Can this kick be brought back into field of play ,,or does it have to be taken in goal ,,& if so ,,as the kickers terms are that of a free kick ,,does this also mean opponents  have to be back 10 meters ,,if so ,,where is mark that they go back 10 meters from ,,Or is it also as my understanding  of above ,,with relation to penalty kicks in goal

If I understand your questions correctly then these should be the answers?

The above is all covered by the following law:

21.1 WHERE PENALTY AND FREE KICKS ARE AWARDED

Unless a Law states otherwise, the mark for a penalty or free kick is at the place ofinfringement.

21.2 WHERE PENALTY AND FREE KICKS ARE TAKEN

(b) When a penalty or free kick is awarded in in-goal, the mark for the kick is in the field of play, 5 metres from the goal line, in line with the place of infringement.


Finally for a Mark made in in-goal, the place of the kick is on the 5m line and the opposition have to be 10m back from that point.

I hope that has answered all your questions?
The Rugby Ref

I found your impressive website and thought I would ask a question I have been thinking on for a while:

Should the game be restarted when a drop-goal is kicked after time has expired? No seems to be the answer in practice but reading law 5.7 I don't think that is an obvious interpretation. 5.7(e) says that

"If time expires and the ball is not dead, or an awarded scrum or lineout has not been completed, the referee allows play to continue until the next time that the ball becomes dead. The ball becomes dead when the referee would have awarded a scrum, lineout, an option to the non-infringing team, drop out or after a conversion or successful penalty kick at goal. If a scrum has to be reset, the scrum has not been completed. If time expires and a mark, free kick or penalty kick is then awarded, the referee allows play to continue."

My problem is that a drop goal is not a conversion or a penalty kick and the referee would not award a scrum, lineout, option or drop-out. And the specific mention of one type of goal but not drop-goals suggests that drop goals were specifically excluded.

Is there something in the laws that I am missing?

If the ball becomes dead that is the end of the game, otherwise play on.  So in your scenario if the drop goal is short and lands in the field of play, then we just play on.  If the drop goal goes long, or is touched down in the in-goal area, then we finish the game because you quoted the law yourself:


The ball becomes dead when the referee would have awarded a...drop out...

If the drop goal goes long or is touched down we would restart with a drop-out, so the ball has become dead at that point; game over.

If a player is tackled to the ground by 2 opponents do both tacklers have the ‘privilege’ of there not being an offside line? Can both players get to their feet, show they are clear of the player and then jackle from the opponents side? Or must one return to his own side and come through the gate?

Many thanks in anticipation, Gary

Opposition players who hold the ball carrier and bring that player to ground, andwho also go to ground, are known as tacklers.

Opposition players who hold the ball carrier and do not go to ground are nottacklers.