The Rugby Ref's changing room, No 21.

Last weekend, really nice club that The Rugby Ref always enjoy going to.  The Rugby Ref had to call an ambulance in the second half for a suspected snapped knee ligament.  Hopefully it won't be as bad as we all thought.

The changing room is a nice size for one or two ref's.  Always clean and well maintained, nice and warm with it's own radiator for The Rugby Ref to warm his shorts on.  No separate showers or washing facilities though. 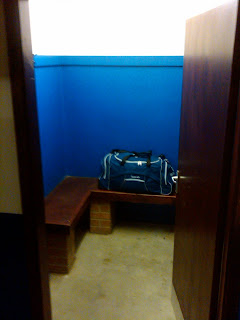 The problem The Rugby Ref had, was knowing if any results were as a consequence of wearing the bracelet, or from other outside forces.  This particular problem has not been solved, so The Rugby Ref has decided to just chart any observations and let you, the reader, make your own mind up.

First thing first.  The Rugby Ref chose the England bracelet shown in an earlier post.  The bracelet looked great, although the white loop is now getting a bit grubby.  Despite wearing it in the shower and giving it a bit of a scrub, this hasn't helped.  So The Rugby Ref's advice, from an aesthetic point of view, is to go for a darker colour.  The Rugby ref would recommend the "Help for Heroes" bracelet.

Week one:  What a nightmare.  Every day The Rugby Ref had aching joints and muscles, every night The Rugby Ref had a disturbed night's sleep.  This was despite feeling ok up to that point.  The Rugby Ref has had many medical treatments where he has been told, "it will get worse, before it gets better".  Maybe this applies to the Trion:Z bracelet?

Week two:  Things got a lot better.  No more aching joints in the mornings, started to sleep like a baby, waking refreshed.  Is there something to this bracelet, or was last week just a coincidence?  Half way through this week the wrist The Rugby Ref was wearing the bracelet on started to ache, right round where the bracelet lies.

Week three:  Wrist stopped aching in the middle of the week, but still feel the odd twinge?  Feeling great in the mornings, even after a game, no aching joints or muscles, even The Rugby Ref's sciatica has faded a bit.

Over all thoughts:  The Rugby Ref is a scientific sort of person, Darwinist rather than Creationist.  Mrs Rugby Ref is a qualified Reflexologist and The Rugby Ref is convinced that works, so he is not against alternative medicine.  Does this bracelet work?  Well The Rugby Ref definitely feels fitter and more alert since the first week of wearing it.  Is this down to the bracelet?  Quite possibly.  Is it a placebo effect or a medical effect?  Who knows, does it matter?

Verdict:  Buy one and make your own mind up.  If it helps you, who cares why?  They look good, they might do you some good, so why not give it a go?  The Rugby Ref wont be taking his off for a while and will update you all if anything changes.

Trion:Z magnetic therapy bracelets
Posted by The Rugby Ref at 13:31 No comments:

Congratulations, your Trion:Z bracelets will be in the post shortly.
Posted by The Rugby Ref at 14:59 No comments:

To celebrate the Six Nations, The Rugby Ref and Trion:Z are giving you the opportunity to win one of 5 Trion:Z Dual Loop, Patriot bracelets. You get to choose from any of the following bracelets worth £19.99 each. 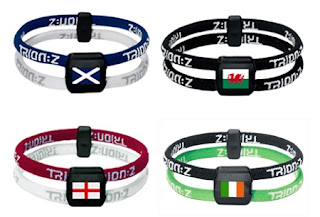 To enter just email your predicted result for the England v Italy game, to be played on Saturday 12th February.  The five entries nearest to the actual final score will win a bracelet.  Send your entry, together with your name, choice of bracelet, size and postal address to asktheref@therugbyref.co.uk  Bracelet sizes can be found at the Trion:Z website HERE. 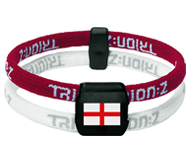 It looks good, but what does it do?  OK, here goes with the "techy" bit:
Magnetic therapy is commonly used within Complimentary and Alternative medicine to help with a wide range of health conditions, including pain relief and injury recovery. The influence of negative magnetic fields is believed to naturally improve the flow of blood and oxygen to areas of injury to facilitate healing and cell regeneration.  Magnetic Therapy is a complimentary and non-invasive natural therapy, deemed a ‘no health risk’ by the World Health Organisation.
Research has shown that ion concentrations in the air can affect and influence our health and behaviour, controlling our energy levels, mood and ability to concentrate.  It is widely believed that the human body absorbs Positive Ions from electrical and digital appliances on a day to day basis. Positive ions are said to interfere with the natural balance and can lead to tiredness, lack of concentration and muscle fatigue.
•  Negative Ions are generally abundant in nature through plants, waterfalls, rain storms and forests. These Ions unfortunately are depleted in urban areas as a result of modern technology.
•  The human body is said to absorb Positive Ions from electronic equipment, cell phones, electrical wiring, and machinery encountered in everyday modern life. Physical stress and exposure to Ultraviolet (UV) Rays also elevates the positive ion levels within the body.
Negative Ion Technology in Trion:Z Products
Trion:Z and Colantotte products are made with negative ion-releasing capsules or with "Mineon Health® Fibers", a unique textile with negative-ion producing minerals woven into the fabric.
The negative-ions in Trion:Z products are released in measurable and significant amounts at rates 50 to 100 times higher than similar products.
What does all that mean?  It means that the Trion:Z bracelet should help with moods, tiredness, concentration and muscle or joint pain.  So if it works, it's a must have for The Rugby Ref.  But does it work?  The Rugby Ref is a scientific and practical person, but he is also open minded and knows that many complimentary medicines have astounding effects.

The Rugby Ref has been wearing his Trion:Z bracelet for a week now, he will continue to report over the coming weeks on any effects.

To celebrate the Six Nations, The Rugby Ref and Trion:Z are giving you the opportunity to win one of 5 Trion:Z Dual Loop, Patriot bracelets.  You get to choose from any of the following bracelets worth £19.99 each.

Keep checking back to TheRugbyRef.co.uk for details of how to enter.

The Rugby Ref's changing room, No 20.

Wednesday afternoon, school Under 17's game.  But they played at their local Rugby Club because all the school pitches had been taken over for football...........!

Not a bad changing room, The Rugby Ref can't quite make his mind up if the sign on the door is complimentary or not? 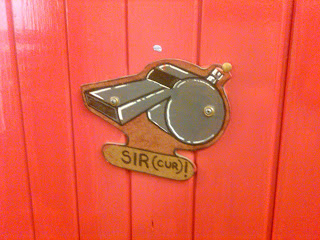 The room was warm and comfortable, has a mirror, but no other facilities.  It's a pity The Rugby Ref had to share it with half a dozen muddy and smelly sub suits!

The Rugby Ref enjoys visiting this club though, as they are always very hospitable.  The Rugby Ref gives this room 5 out of 10. 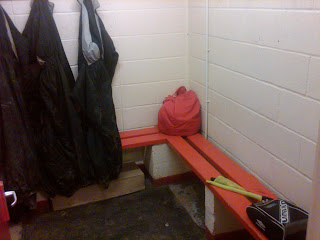