In a further development to The Rugby Ref's post on Global Law Trials, the IRB have issued a further memo subsequent to its recent press release, in which the IRB has now approved an amend to the scrum engagement sequence, along with some other notices

The Rugby Ref suggests you visit irblaws.com where the changes are illustrated with the use of video clips.


The International Rugby Board and its Member Unions have sanctioned a global trial of five aspects of Law amendments following an extensive process of consultation and evaluation.

The trial, approved by the IRB Council at its Annual Meeting in Dublin on Tuesday, will commence at the start of the next season in each hemisphere (August 2012 in the north and January 2013 in the south) and will be applicable to both international and domestic competition.

Aspects of Law approved for trial include limiting the time that the ball is available at the back of a ruck and the positioning of taking a quick throw-in. In addition to the suite of seven Laws approved for global trial, three additional trials will operate during 2012.

A trial extension of the jurisdiction of the Television Match Official will be introduced later this year, while the number of nominated replacements in Test Rugby will be increased to eight for a trial in the November window.

The global trial has been sanctioned after an unprecedented evaluation process that kicked off with submissions and recommendations for 20 potential amendments from Member Unions and has culminated with recent trials of amendments to seven aspects of Law as a package at dedicated playing environments in Cambridge and Stellenbosch.

This evaluation process is in line with the remit of the Laws Amendment Process approved by the IRB Council in December 2009.

Unlike previous amendment processes, the process of selection, monitoring and evaluation has been steered by an independent Laws Representative Group, comprising technical representatives from each of the 10 Tier 1 Unions covering elite and community Rugby and representatives of the IRB Rugby Committee.

Extensive evaluation of the Cambridge and Stellenbosch University trials undertaken earlier this year determined that each of the seven amendments could have a positive effect on the Game or clarify existing areas of Law and therefore a recommendation was made to the IRB Council via the IRB Rugby Committee to approve a global trial of all seven amendments.

The five Law amendments to be trialled globally are:

1. Law 16.7 (Ruck): The ball has to be used within five seconds of it being made available at the back of a ruck with a warning from the referee to “use it”. Sanction – Scrum.

2. 19.2 (b) (Quick Throw-In) For a quick throw in, the player may be anywhere outside the field of play between the line of touch and the player’s goal line.

3. 19.4 (who throws in) When the ball goes into touch from a knock-on, the non-offending team will be offered the choice of a lineout at the point the ball crossed the touch line; or a scrum at the place of the knock-on. The non-offending team may exercise this option by taking a quick throw-in.

4. 21.4 Penalty and free kick options and requirements: Lineout alternative. A team awarded a penalty or a free kick at a lineout may choose a further lineout, they throw in. This is in addition to the scrum option.

5. A conversion kick must be completed within one minute 30 seconds from the time that a try has been awarded.
In addition to the global trials, the IRB Council approved three specific additional trials:

1. A trial to extend the jurisdiction of the TMO to incidents within the field of play that have led to the scoring of a try and foul play in the field of play to take place at an appropriate elite competition in order that a protocol can be developed for the November 2012 Tests.

2. A trial has been sanctioned for the November 2012 Test window permitting international teams to nominate up to eight replacements in the match day squad for Test matches. In line with current practice at domestic elite Rugby level, the additional player must be a qualified front row player.

3. An amendment to Law 3.4 (Sevens Variation) to enable Sevens teams to nominate up to five replacements/substitutes. Under the revision, which will operate from June 1 2012, a team may substitute or replace up to five players during a match. Approval has been granted on player welfare grounds to recognise the additional demands on players and squads owing to the expansion of the HSBC Sevens World Series where there are three blocks of three events on consecutive weekends.

Council also approved the referral by the Laws Representative Group of one potential Law amendment that was successfully trialled at Cambridge and Stellenbosch for further consideration by the specialist Scrum Steering Group (overseeing scrum force project) to be considered alongside the ongoing review of the scrum.

The amendment that will be considered by the Group relates to the engagement sequence and will see the referee call “crouch” then “touch”. The front rows crouch then touch and using outside arm each prop touches the point of the opposing prop’s outside shoulder. The props then withdraw their arms. The referee will then call “set” when the front rows are ready. The front rows may then set the scrum.

“We have a collective responsibility to ensure that the Game is as enjoyable to play, officiate and watch as possible at every level while player welfare is of paramount importance,” said IRB Chairman Bernard Lapasset.

“Rugby is currently in good health with participation growing around the world, but there is collective responsibility to ensure that a structured process can be implemented to allow for global analysis and to monitor trends relating to the shape and character of the Game as it evolves.”

“The approval of five aspects of Law for global trial is the culmination of the Laws Amendment Process which was agreed by the IRB Council in 2009. The journey to this point has been exhaustive and collaborative and has involved full stakeholder consultation and I would like to thank Member Unions for their buy-in and commitment to the process from the outset.”

“The Laws Representative Group were encouraged by the outcomes of the initial trials in Cambridge and Stellenbosch. The next step is a global trial with full buy-in and which has been approved by Council on the basis that the amendments can have a positive effect on the playing of the Game.”

“The global trials are not fait accompli. It is essential at the end of the global trial process that decisions made are in the best interest of Rugby worldwide,” added Lapasset.
Posted by The Rugby Ref at 10:31 No comments:

The Rugby Ref ran touch for one of our up and coming young referees in the week, for an end of season cup final.

The Rugby Ref wasn't really expecting much in the food department, as the game was at a neutral club.  What a pleasant surprise then to get Roast Beef, Yorkshire pudding, roast potatoes, carrots, boiled potatoes, gravy, horseradish sauce.  All topped off with a pint of Doombar bitter. 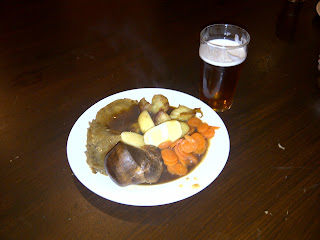