The Rugby Ref ran touch for a county cup game this Sunday (after a Saturday league game with yet another curry!).

The post match meal was fantastic.  Ham, chips and egg, with bread & butter and a pint of Bombardier.

A really great meal which The Rugby Ref gives 10 out of 10.  There were even seconds! 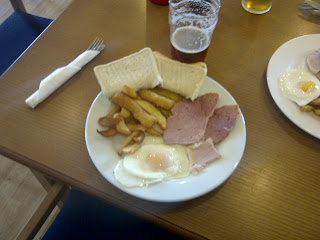 A question from the France v England match


"I was wondering, in the England France match when Phil Dowson was injured, the referee blew up to protect him, should the ref have awarded the scrum to England. I ask because I have seen very little press comment – compared to say the Charlie Sharples yellow, and it was potentially a crucial decision.

The Laws state - If the referee stops play because a player has been injured, and there has been no infringement and the ball has not been made dead, play restarts with a scrum. The team last in possession throws in the ball.

Tom Croft was in possession – I recall because he trod on Phil Dowson’s head. The ref awarded the scrum to France on the basis they had the forward nudge at the ruck, but if it was not for the injury, he would not have stopped play as the ball was already becoming available to England.

What are your thoughts?"


The Rugby Ref was puzzled by this as well, thinking that this was a stoppage for an injury.  The put-in at the resultant scrum should have gone to the team in posession at the time of the stoppage.

However, it appears the referee didn't stop for the injury, he stopped because he deemed the ball was unplayable at the ruck.  He only noticed the injury after he stopped the game.

The law says if the ball is unplayable at a ruck, the put in at the resultant scrum goes to the team moving forward just before the stoppage.  Which in the referee's estimation was France.

Hope that helps.
Posted by The Rugby Ref at 13:44 No comments:

"Why are players allowed to clearly handle the ball in the ruck? I regularly see the following situation in internationals:

Why is this allowed? It seems like a flagrant breach of the rules to the detriment of the opposition.
Thanks."


"I just asked a question about hands that it seems you answered HERE:
I have a follow on question though. Why is handling in the ruck simply not allowed at schoolboy level whatsoever? The inconsistency is illogical and difficult for players to reconcile between what they see and what they play. If the logic of letting it slide is that the ruck was probably already won and it helps play continue, why are schoolboy refs not instructed to do the same?
Thanks."

There are two things in play here.  Contextual Judgement and Materiality, both of which are explained in the article you linked to.  So why do schoolboy referees do it differently?

The Rugby Ref is not conviced that ALL schoolboy refereees do this, however"Contextual Judgement" and "Materiality" are two of the hardest things to learn and understand, and it may simply be that the schoolboy referees you see have not yet learned how to apply it?

Referee Societies do not usually appoint to schoolboy games and they may be getting referees who are teachers or other students.  They may not be getting the training and coaching that Society referees get and there could be a difference in standards.  This is not to say they are doing it wrong, just that they are doing it differently for the game they are refereeing.  That is what contextual judgement is all about.

Thanks for the question Jack.

However last weekend The Rugby Ref went to Madrid for an Under 20's top of the league clash.  A tremendous game, followed by food and hospitality that scored a solid 10 out of 10.

A selection of Tapas and the biggest, most mouth watering steak The Rugby Ref has ever had, made this the best post match meal ever.  OK, so the Madrid Referees' Association pushed the boat out a bit for their guests, but this has really set the benchmark for all meals to come. 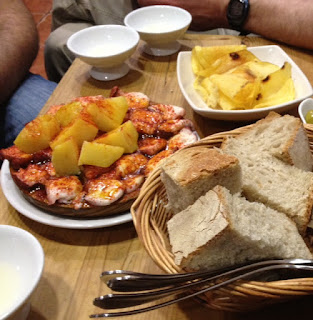 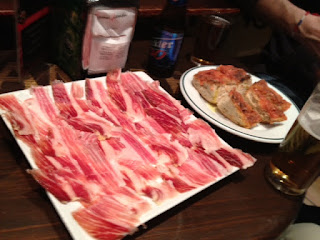 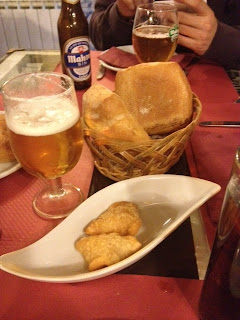 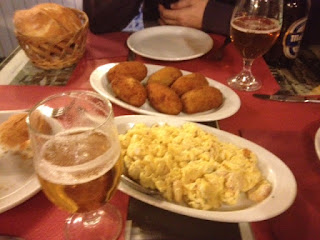 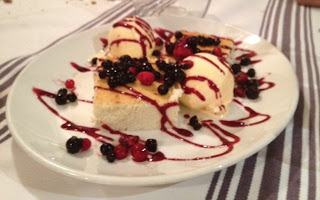 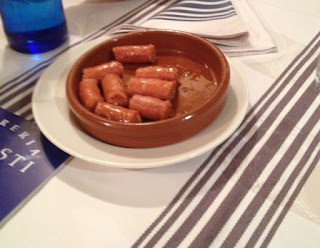 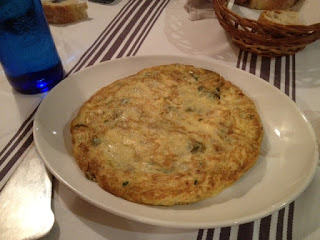 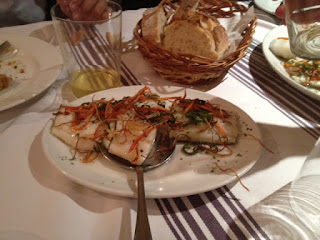 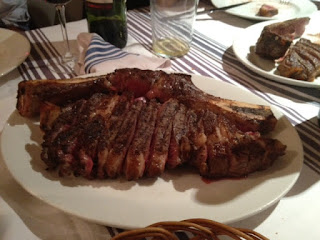