Sport - a time and motion study by Watches2U.
Posted by The Rugby Ref at 16:06 No comments:

Are these studs legal?

Would it be possible to tell me if these studs are legal to play rugby in?

Many thanks in advance 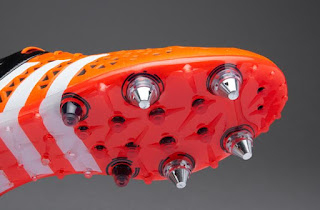 The Rugby Ref gets asked this question a lot.  The legality of studs is covered in World Rugby Regulation 12 which can be found here: Regulation 12

If I award a penalty try must I always 'sin bin' the offender?

Good question.  The Law states that...


A penalty try must be awarded if the offence prevents a try that would probably otherwisehave been scored. A player who prevents a try being scored through foul play must either becautioned and temporarily suspended or sent off.

This would suggest that a Penalty Try must also be accompanied by a Yellow or Red card.  However the IRFU asked for a ruling on this very question back in 2004.  The response from World Rugby is still active.

Ruling in Law by the Designated Members of the Rugby Committee

Law 10.2(a) is Unfair Play relating to Intentional Offending.

The two paragraphs in Law 10.2(a) must be read in conjunction, having due regard to the heading 'Intentionally Offending'.

Therefore, if a penalty try is awarded as the result of a player intentionally offending, then the player must be either be cautioned and temporarily suspended or sent off.

Examples of this would be after penalty tries resulting from:

If a penalty try is awarded as the result of a player unintentionally offending, the player, as well as being liable to cautioning and temporary suspension or send off, can be admonished by the referee.

Examples of this may be after penalty tries resulting from:


So the answer to your question is 'No' you don't always have to card the player.
Thanks for the question.
The Rugby Ref
Posted by The Rugby Ref at 10:33 No comments:

Is a tackle in the air always a yellow card?

I have had a debate with a guy at my local club about a tackled player in the air. If it is clear one player has tackled a ball carrier in the air but it is not dangerous but poor timing is it just a penalty kick or a yellow card, my view is a PK?

Thanks for the help?

The sanction for "Tackling the jumper in the air" is prescribed under Law 10, Foul Play.


10.5 SANCTIONS(a) Any player who infringes any part of the Foul Play Law must be admonished, or cautioned and temporarily suspended for a period of ten minutes’ playing time, or sent-off.

So if the referee decides foul play has been committed it could be just a telling off with a Penalty Kick, a Yellow card, or even a Red card.  World Rugby do however issue guidance to referees from time to time on various areas of the law, and this is one area that was covered recently.


At a meeting in April 2015, the Laws Representation Group (LRG) considered the areas of the Game where, it had been agreed that Law amendments were not required but that current Law was to be enforced by match officials including:

The options given were:

There are videos to illustrate the above available here:  World Rugby Enforcement of Current Law

So using the guidance, your example of "one player has tackled a ball carrier in the air but it is not dangerous just poor timing" depends on whether the player was making a fair challenge for the ball?  If he was it's a penalty only.  If he wasn't going for the ball and just tackled the other player in the air, then it's a minimum of a penalty with a yellow card.

Hope that answers your debate Allister.
The Rugby Ref
Posted by The Rugby Ref at 09:36 No comments: