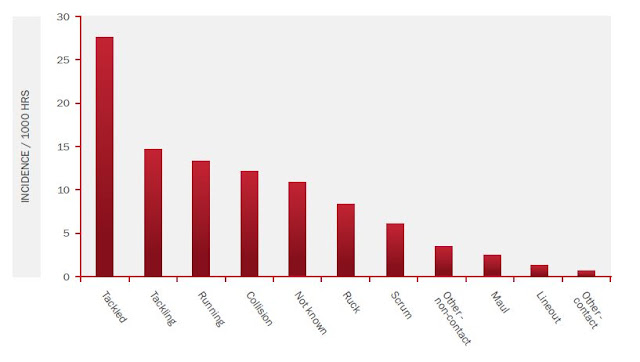 
The increased usage of video technology will help ensure that overreactions don’t occur and will help result in a more agreeable and explainable decision, but will the extra liability that it appears to place on the referee result in the overall feeling toward the change being negative?
The Rugby Ref welcomes comments on this article.
Posted by The Rugby Ref at 13:11 No comments:

Who gives a toss?

I always hear some conflicts around this point so I would love to know the truth. At coin toss what options do the winning team have, and likewise the non winning team.

This is a very simple law, but one that referees and players alike get confused over.

The winner of the toss will choose between "kick or choose ends".  Whichever they choose, the other captain gets the other option.

The only option they can't choose is "to receive".  If they want to receive then they must choose an end.

Hope that explains it.


Ruck/Maul formed in goal? At our last match, the red team was attacking toward the blue teams goal and was within 5m for a good 1 minute. When a ruck on the goal line was turned over to blue. In the heat of the battle the ruck moved entirely into the in goal area with out much of the players noticing. When a red player finally realized this he ran around the "ruck" (really just a pile of players in goal?) and touched the ball down. The referee whistled him for offsides and blue assumed a penalty kick on the 5m, is this correct, can you have a ruck in goal and thus an offsides line?  In the same context a when a maul enters the in goal area does there remain an offsides line?

Lets look at some law references

16.6 Successful end to a ruck
A ruck ends successfully when the ball leaves the ruck, or when the ball is on or over the goal line.

So when the ruck moved into in-goal, the ruck ended.  When the ruck ended offside lines disappeared.
At this point we were basically in open play. So the red player (or any other player) can run round and ground the ball for a try.

Hello
I have seen and heard many variations as to when the ball is out of the scrum/ruck and is challangable, Some people say when the scrum half has both hands on the ball, some say when its lifted. Is there an official view?
Alan

This is a question that referee's get asked a lot.  The official view, is the one in the law book.

Law 16.6 SUCCESSFUL END TO A RUCK
A ruck ends successfully when the ball leaves the ruck, or when the ball is on or over the goal line.

Unfortunately the official (Law Book) view is anything but clear.  What is the definition of "leaves the ruck"?  They don't say.  So it is down to the referee's interpretation.

The best advice is to ask the referee for his definition of "ball out" before the game.

The Rugby Ref says "The ball is out when it leaves the ruck, that means beyond the back foot of the breakdown, or lifted off the floor".

Thanks for the question.
The Rugby Ref.

Can you please tell me if these stud are legal for match day?
Robbie 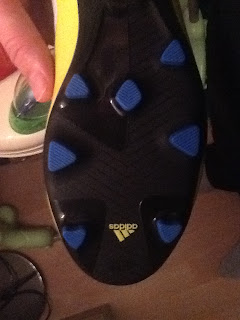 Those studs look perfectly legal to The Rugby Ref, what makes you think they might not be?

The key question with studs is "are they dangerous".  No kinds of blades or studs are banned, as long as they are not sharp or burred (or exceptionally long or wide, see IRB regulation 12).

You may find some useful information on the RFU website here: http://www.rfu.com/TakingPart/PlayerHealth/FAQs

There is a question about blades, where it explains the IRB regulations, explains that they are legal and why.