On Saturday I reffed a level 9 game. During the maul phase players went to ground, not deliberately. On two occasions players insisted they could remain holding the ball on the ground to prevent the player in possession getting the ball to scrum half ie (blue tackles red, remain on feet, maul formed. Blue and red players wrestling for ball fall to floor on red side. Blues remains holding ball preventing continuum of play). What worries me that both teams attempted this tactic and inferred this was allowed.

I sanctioned both plays as playing the ball on floor preventing release. Was I incorrect. I have re read the Law 16.16 but I am non the wiser?

Unfortunately the players were correct on this occasion, but well done for questioning yourself and hopefully you will be able to get it right from now on.

When a maul goes to ground legally (i.e. it was not pulled down by anyone) then players who have a hold of the ball or ball carrier do not have to release or roll away (law 16 doesn't say they have to; as it does in the tackle law for instance).

This then becomes an unsuccessful maul because the ball has become unplayable and/or was not immediately available.  The result is a scrum turned over to the team that didn't take it in (unless it was formed from a kick in open play; see law 16.18).

The wording of the law has changed slightly in the new 2018 law book, but the law itself hasn't changed.

Also remember they don't have to roll away if they are on the ball as it collapses, but they can't dive over the ball after the maul goes down.  And the ball must be available immediately for play to continue.

Another game, another changing room...

The changing room was basic, but had everything you need...except a mirror.  Own toilet and shower (although the pressure was low), lovely warm heater. 8/10 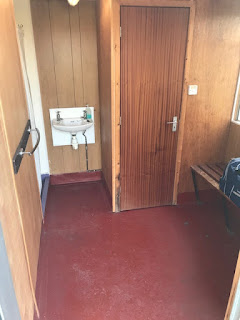 The pie and beans was so nice The Rugby Ref had eaten half of it before he remembered to take a photo.  Good pint of ale.  The cardboard bowl was marginally better than a foam one, but trying to eat a pie with a flimsy plastic fork was a challenge.  9/10 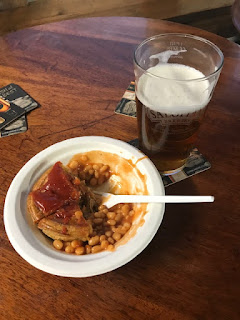