Hi,
One of those niggly questions I've always wanted to ask. How do you accurately decide the mark that the conversion kick will be taken from? I know it is in parallel with the place the ball was grounded by the try scorer, but is there a set distance away.
TYIA
Mark
Hi Mark
The simple answer is 'no', there is no set distance.﻿
For a conversion attempt the kicker may place the ball anywhere on a line that runs from the goal line, at the place the try was awarded, back down the pitch, parallel to the touchline.  He can go as far back along that line as he wishes.
For a penalty kick at goal, the kicker may kick from the mark, or anywhere along a line that runs back through it.  One thing to note here, is that the defence must stand 10m back from the mark, not 10m back from where the kicker elects to take the kick from.
Thanks for your question.
The Rugby Ref
Posted by The Rugby Ref at 15:04 No comments:

Question from Kevin Morrissey in Dubai.

The Rugby Ref has received a question from Kevin which asks:


Can a team make a substitution at penalties. ?
Simple question so many versions: My understanding is that the team who was awarded the penalty may make a substitution with the permission of the Ref as they decide how long the ball is dead, one assumes that if they make a sub, then the opposition may also sub but may not initiate it. Normally it would appear that subs at a penalty is a no-no.
Comments/help please
Well Kevin, the law is very simple on this, it says:


3.4 PLAYERS NOMINATED AS SUBSTITUTES
Substitutions may only be made when the ball is dead and with the permission of the referee.
There is also a clarification in law on this subject:


Ruling 2-2007 (extract)
Date 12 March '07
Request
1. A penalty kick is awarded to White team. Before the kick is taken, can White team make a substitution?
Ruling of the Designated Members of the Rugby Committee
A substitution can only be made when the ball is dead. A referee must not let a player rejoin the match until the ball is dead. The ball is dead when the ball is out of play. This happens when the ball has gone outside the playing area and remained there, or when the referee has blown the whistle to indicate a stoppage in play, or when a conversion kick has been taken.
In the case outlined above, the ball is dead, and therefore the answer to the question is in the affirmative.
What would The Rugby Ref do?

The Rugby Ref's changing room, No 19.

The Rugby Ref had to share with a rugby league referee, but you can't mark them down for that!

This would have been a 10 out of 10 but for a couple of things.  There is no sink or mirror and The Rugby Ref is a vain creature; and the showers were cold, despite running them for a good 5 minutes.  So The Rugby Ref gives this room 9 out of 10. 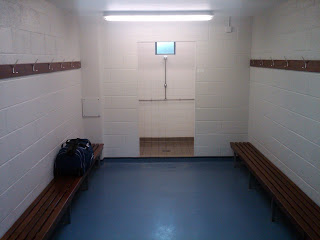 The Rugby Ref's changing room, No 18.

The location of the ref's changing room at this club is unlike any other.  You go into the showers, then through a sort of 3/4 barn door into the referee's room.  Having said that, it is large and clean, has two sinks, a mirror and it's own toilet........and not far to go to the showers!

The Rugby Ref gives this changing room 6 out of 10. 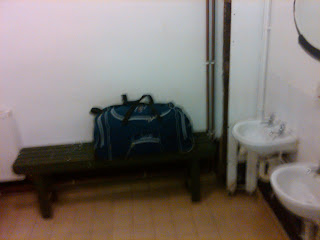 The Rugby Ref's changing room, No 17.

This weekend The Rugby Ref was at a rugby club that shares it's facilities with a football club, a cricket club, netball, golf and bowls.  So you would think they would have a small room for the referee/umpire/match official.  But they haven't.


"Not sure where we are going to put you ref, footballers are in there, try this one."
The room was not bad.  Large, warm and The Rugby Ref was undisturbed.  But there was no separate shower.﻿  The Rugby Ref gives this changing room 4 out of 10. 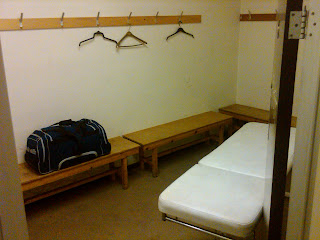 The Rugby Ref's changing room, No 16.

The Rugby Ref ran touch this weekend for a Cup Game.  The club is very forward thinking as they have referees' changing rooms available, for both male and female referees. 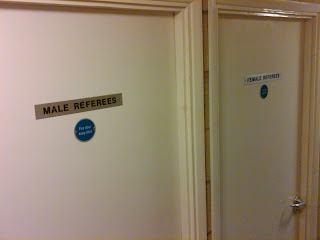 The changing room had plenty of space for a team of three referees.  There was a shower and a toilet, just for referees and we were all offered a cup of tea on arrival.  Unfortunately the shower only had two temperatures, very hot and even hotter.  Still, once the first layer of skin was burnt off you didn't feel much pain!

The Rugby Ref gives this changing room 9 out of 10. 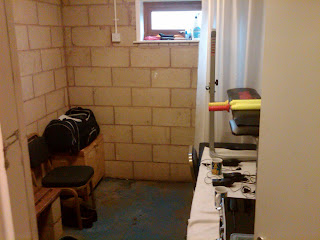 Urban Myth No 3 "I'm the Captain, I have the right to speak to you".

So does the Captain have the "right" to speak to the referee?  No he doesn't.  However referee's recognise that it makes for a better game if the referee works "with" the captain, for the good of the game.

Before tossing the coin at the start of the game, The Referee will have a little chat with both captains.


"Captains.  Discipline is down to you; you manage your players, I will manage the game".
"Captains.  Players play, referee's ref.  Make sure you don't get the two mixed up.  Any questions through you please".
"Captains.  I don't want to hear players appealing for perceived offences.  If I hear it, you hear it, so shut them up from the off.  If you can't do that I will have to and my options are very limited".
As you can see, the words vary, but the message is the same.  When players start appealing for offences there are several problems.
None of those help the game.  The Rugby Ref often has teams that like to give him a commentary, he does not allow it to continue.  What The Rugby Ref always sees, is that when players stop appealing and start playing, they always play better.

So back to the captain.  You will all have heard referee's say "questions through your captain please".
The Rugby Ref gives the captain permission to ask a question, to which he will give the courtesy of a reply.  But it must be a question (what was that last penalty for please Sir?) and it must be at the appropriate time (not when a quick penalty is on).  This is not an invitation to debate a decision, nor is it an excuse for a captain to berate the referee.


10.4 DANGEROUS PLAY AND MISCONDUCT
(s) All players must respect the authority of the referee. They must not dispute the referee’s
decisions. They must stop playing at once when the referee blows the whistle except at a
kick-off or at a penalty kick following admonishment, temporary suspension, or send-off.
Sanction: Penalty kick
You will notice it says "All" players.  No exception is made for the captain.  As this is under the Foul Play Law, the following applies:


10.5 SANCTIONS
(a) Any player who infringes any part of the Foul Play Law must be admonished, or cautioned
and temporarily suspended for a period of ten minutes’ playing time, or sent-off.
So to summarise; the captain is given special permission to speak to the referee.  This is not a right under law and the permission can be withdrawn if it is abused.