"How often do we hear this?

Loose ball, defender goes to ground to gather it.  Attacker arrives over the defender and everyone shouts "he has to let him up".  Usually the attacker obliges by waiting for the defender to get to his feet before tackling him and putting him straight back onto the floor.  But does he need to?

The simple answer is no.  The phrase "he has to let him up" isn't mentioned anywhere in the 'Laws of the Game'.  A better phrase to shout might be "play the ball".

Let's look at what the law actually says:


The Game is to be played by players who are on their feet. A player must not
make the ball unplayable by falling down. Unplayable means that the ball is not
immediately available to either team so that play may continue.
So the player who goes to ground must do one of three things "immediately".  Get up, pass, or release the ball.  If an opposition player arrives, who is on his feet, the ball must be immediately available to him if he wants it, providing he stays on his feet.

So the player on the floor has three options, but if a player on his feet wants the ball he MUST release the ball to that player.  His options evaporate at that time, "the man on his feet is king".

There is no obligation for the arriving player to let him, up, only to stay on his feet and play the ball.  The man who is off his feet must then release it, immediately.

How often does The Rugby Ref hear this?

It usually goes along these lines.  The Rugby Ref gives a penalty for some infringement or another.  The defenders do something that causes The Rugby Ref to advance the mark for the penalty forward 10m; usually kicking the ball away to prevent the attackers taking a quick tap.

As The Rugby Ref measures out 10m the defenders stand in front of the new mark shouting "they can't take a quick one ref".

Now there are two issues here:
What the law actually says is:


21.7 What the opposing team must do at a penalty kick
(a) Must run from the mark. The opposing team must immediately run towards their own goal
line until they are at least 10 metres away from the mark for the penalty kick, or until they
have reached their goal line if that is nearer the mark.
(b) Must keep running. Even if the penalty kick is taken and the kicker’s team is playing the
ball, opposing players must keep running until they have retired the necessary distance.
They must not take part in the game until they have done so.
(c) Kick taken quickly. If the penalty kick is taken so quickly that opponents have no
opportunity to retire, they will not be penalised for this. However, they must continue to
retire as described in 21.7(b) above or until a team-mate who was 10 metres from the mark
has run in front of them, before they take part in the game.
(d) Interference. The opposing team must not do anything to delay the penalty kick or obstruct
the kicker. They must not intentionally take, throw or kick the ball out of reach of the kicker
or the kicker’s team mates.
Sanction: Any infringement by the opposing team results in a second penalty kick, 10
metres in front of the mark for the first kick. This mark must not be within 5 metres of the
goal line. Any player may take the kick. The kicker may change the type of kick and may
choose to kick at goal. If the referee awards a second penalty kick, the second penalty kick
is not taken before the referee has made the mark indicating the place of the penalty.
The Rugby Ref has highlighted the last sentence of the sanction.  As you can see the attackers can take the second penalty kick, once the referee has made the new mark.  No mention of "they can't take it quick".
It works like this, the referee will walk 10m.  While he does this the defenders must run back 20m, to put themselves onside.  The law specifically says they must "run from the mark" and "keep running".  Once he has advanced 10m the referee will make the new mark.  As soon as he has done so the attackers may go.
Standing in front of the referee shouting "they can't take a quick one ref" is a breach of 21.7 above, it is also dissent towards the referee and could be construed as deliberate offending.  So at best the penalty is moving forward another 10m, and you could easily get a yellow card.
Urban Myth No 1...........Busted!
Posted by The Rugby Ref at 12:00 No comments: 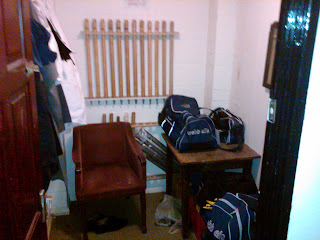