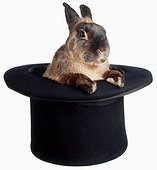 Pulling the rabbit out of the hat is usually something magicians do.  It comes as a big surprise.  Referees are not magicians, so we don't want to see them pulling any rabbits out of the hat.

By this The Rugby Ref means the Red or Yellow card that comes out of nowhere (like a rabbit from a hat).

The Rugby Ref is really a very nice person and likes to be pleasant and polite to the players.  The Rugby Ref has an escalation procedure for dealing with those who transgress on the rugby pitch.

Assuming the transgression has no material effect on play.
First of all The Rugby Ref will ask you nicely not to do it.
"Blue 7, you're straying offside at the rucks, please stay behind the backfoot."
"Red 6, stay on your feet at the breakdowns please."

If players fail to take note at this point The Rugby Ref is going to start thinking about what other tools he has in his management toolbox, because The Rugby Ref is not going to keep giving penalties all match and may have to escalate to a "Yellow Card" for repeat offending.

Of course sometimes the "Yellow Card", or even the "Red Card", will come without any warning, but it should still not come as a surprise.  It is going to be in a situation where The Rugby Ref would hope everyone, including the players, would expect it.  For instance:

All of the above 'may' result in a card, but if it does, it should not appear like the magician's rabbit.  The Rugby Ref has to make the final decision on what is a "Penalty", what is a "Yellow Card" and what is a "Red Card".  Sometimes this is based on the laws of the game, sometimes on referee's directives and sometimes the players reaction will tell you if a line has been crossed.

So next time your referee produces a card out of his pocket, have a think about what has already happened, have a think about any advice or warnings the referee has given out.  The Rugby Ref hopes you will come to realise that it's not appearing like a rabbit out of a hat; instead it's appearing as the expected finale to the act?
Posted by The Rugby Ref at 22:49 No comments:

The Rugby Ref's changing room, No 26.

Always save the best till last, that's The Rugby Ref's current motto.

Premiership club, where The Rugby Ref was 4th Official for the National Colts Cup final.

Greeted at the gate, "Park over there by the players Sir".
Shown to the dressing room.
Clean and spacious with private showers, toilet, sink, mirror........and all the Gatorade you can drink.

The Rugby Ref gives this room a resounding 10 out of 10. 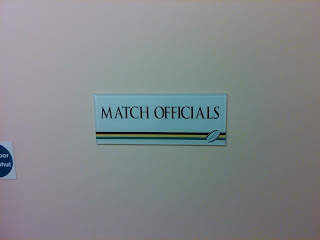 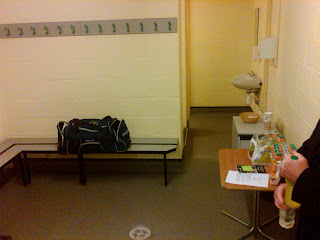