The Rugby Ref has had an email from Chopper, who is a Redruth and Pirates fan.

The Rugby Ref would like to respond to one particular questions from Chopper's email, (abbreviations in the original email have been expanded).


Dear Rugby Ref,
Would appreciate your views on how variations in
Southern Hemisphere / Northern Hemisphere referees
interpretation of the Laws of the Game should be managed.
Chopper
In response The Rugby Ref would like to quote Paddy O'Brien, Head of IRB's Referee Board.
"Two hemispheres, the same laws.
There is common misconception that there are two sets of laws, one for Six Nations and European rugby, one for the Super 14 and Tri Nations.  Some even go so far as to say that there is a law book for professional rugby and another for amateur.  There is no difference in the laws at any level.  However there is a difference in standards between referees, and a difference in players.  I see that there is far more player buy-in at more junior grades of rugby.  Generally, the players at this level want to play rugby and "cheat" a lot less.
At top levels, players are highly tuned, extremely well prepared athletes.  They will bend the laws as far as possible.  This inevitably impacts on how the game is refereed and managed.
As to perceived differences in hemispheres, I would put this down to two factors.  The laws are the same, but the weather conditions are different when the tournaments are being run.  Hard grounds in South Africa produce a different game to soaking, windy conditions at Twickenham.
It is also fair to say that different countries have a different style of rugby as well.
Even in the Northern Hemisphere, there are differences between nations.  So, whilst the laws are equal across the globe, players will play in a different way, thus invoking different situations in which the laws are applied."
Posted by The Rugby Ref at 13:16 No comments:

The Rugby Ref's changing room, No 2. 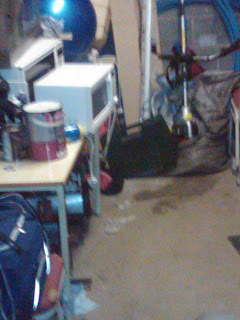 When The Rugby Ref blows his whistle he has to communicate to everyone why he has done so. He can do this using his voice and with signals.  The sequence usually goes whistle, voice, primary signal, secondary signal. But why bother?

Well communication is important for the players, the coaches and the spectators.

Whistle.
Spectators may not be aware that The Rugby Ref uses different whistle tones for different stoppages. Lineout, ball going dead, etc get a quick peep just so people know to stop playing. Scrums and free kicks will get a slightly longer and louder blast. Penalties will result in a long loud blast that should stop everyone in their tracks.

Voice.
Short, clear and concise. "Penalty, green 7, hands in"; or "Penalty, blue 3, off his feet". The Rugby Ref may also decide to include a short explanation if he feels it is required, to prevent repeat offences. But this should be a short statement, not an invitation to a discussion. "Black 6, you were off your feet... no hands, roll away". "Red 3, release man and ball completely before you compete for the ball".

Primary signal.
This should be what you are giving, penalty, free kick or scrum.

Secondary signal.
This should be why you are giving it. In at the side, knock on or pulling down the maul.

Signals should be crisp, clear and unambiguous. Occasionally The Rugby Ref may not have time for a secondary signal, if a quick penalty is taken for instance. Wherever possible though, The Rugby Ref will try to keep everyone informed with good clear communication. Players and coaches may not be exactly happy with a decision, but at least they will know what they did wrong and why they got penalised.

Next time you watch rugby on the television watch the referee and see if you can work out what happened just from his whistle and signals.

You can see examples of all the official signals on the IRB Laws website by clicking HERE.

The game is to be played by players who are on their feet.

"The game is to be played by players who are on their feet".  You will find this phrase, or variations of it, throughout the "Laws of the Game" and it seems, on the face of it, to be a pretty obvious statement.  The confusion comes from the often ignored statement that "players who are off their feet are out of the game".

Let's look at a couple of definitions, because The Rugby Ref likes to be sure we are all talking about the same thing.

Player on his feet:  This is a player whose weight is solely supported on his feet

So if you are off your feet you are out of the game.  The Rugby Ref knows this, but sometimes he sees the players forget it.

For instance if the ball is made available after a tackle The Rugby Ref often sees players on their knees pick it up and pass it.  The Rugby Ref also sees players lying on the floor sweep it back with their arms.  "But Ref" they cry "it was out" or "you didn't call ruck".  The Rugby Ref then has to remind them that they were off their feet and out of the game.

Sometimes The Rugby Ref sees a player lying on the floor, who tackles the ball carrier.  Most player know this is illegal, what they find harder to comprehend is a player on one knee, or leaning on a player on the ground, who does the same thing.  Remember the definitions.

Finally an example that always has the crowd calling for The Rugby Ref's head.  A player gets tackled close to the goal line and then scrabbles along the floor on his hands and knees to reach out and score a try.  The main reason this causes howls of protest when The Rugby Ref gives a penalty against the ball carrier, is because people have partial knowledge of Law 22.4 (d) and (e).

(d) Momentum try. If an attacking player with the ball is tackled short of the goal line but the
player’s momentum carries the player in a continuous movement along the ground into the
opponents’ in-goal, and the player is first to ground the ball, a try is scored.

Either the player's momentum carries him over the line in "one continuous movement", or the player reaches out and grounds the ball "immediately".  What the law does not allow the player to do is fall short of the line and then have another go by doing a baby crawl over the line.

"Let me ref the game".  This is something The Rugby Ref says to the team Captains before the game, but do the Captains pass it on and what does it mean?

It is linked to the fact that rugby referees have a wide latitude to "manage the game", rather than blindly following the laws of the game.  What does this mean, how does it work; and more importantly how does it affect the players?

Let's have a look at some figures.  At the following breakdowns I have listed the approximate number of offences that The Rugby Ref could penalise a team for:

What you can see straight away, from those numbers, is that if The Rugby Ref wants to be pedantic and play to the letter of the law, he could find something to penalise at every single breakdown.  However this is where referees have to apply materiality and use their management skills, if they didn't the game would take place on a patch of grass ten feet square!

By the same token players need to learn to "let me ref the game".  Just because The Rugby Ref hasn't blown his whistle, doesn't mean he hasn't seen an offence.  The Rugby Ref sees everything, but then he has to decide, "do I need to blow for this offence?", or "is this offence having a material affect on the game?".  If the answer to either questions is 'Yes' then The Rugby Ref next needs to decide, "do I play advantage?", "do I wait to see what happens next?", or "do I blow straight away?".  All of these decisions need to be made in the blink of an eye.

Will Brewer "Asks the ref".

The Rugby Ref has had an email from Will Brewer, who we think is in the USA.
Will asked this very interesting questions by emailing to "Ask The Ref" (see top right of this blog).


Will Brewer to asktheref
Hello Rugby Ref,
I've downloaded and read the IRB Laws, even passed their online exam.
However I still feel there are some "finer" points or definitions that are
missing (enjoyed your blog on the tackler/tackled "immediately" doing what
they are supposed to do-always thought there was more to that). Do you know
of any further, more detailed information sites?
Thanks, Will
Will brings up a very important point.  Is there more to this game than the laws?  The answer is a definite "yes".
The "Laws of the Game" of Rugby Union are a framework which The Rugby Ref uses to "manage" the game.  It's a bit like learning to drive.  You have read the highway code, you have practised the mechanics of driving the car off the public road and it all seems very straight forward.  But the first time you drive onto a motorway or a main road, you realise there is a lot more to driving than just learning the rules of the road!  Rugby Union is no different.  In the UK when you attend an Entry Level Refereeing Award (ELRA) course one of the first things they tell you about is S.E.L.
These are the basic principles that The Rugby Ref uses.  It should come as no surprise that Safety is top of the list, but it may surprise you that Law is at the bottom.  The Rugby Ref is there to facilitate the players getting an enjoyable game of rugby; within the laws of the game.  The Rugby Ref is there "for" the players.  Never forget that.

Managing the game and what that means exactly is the topic of The Rugby Ref's next post, which will be published shortly.  Watch out for it.
To answer Will's question on where to go for more detailed information, there are a few places The Rugby Ref would recommend:
I hope that answers your question Will; and keep reading.
Posted by The Rugby Ref at 11:50 No comments: