"While watching Romania vs. Scotland in the RWC I noticed that Romania while binding on during a ruck would pick up the ball and place it at their feet. The next player to bind on would again pick it up and put it at his feet. Is this a modified way of playing the ball at the back of a a ruck? Not sure why it was not called."

The first thing to remember is that 'TV' rugby is different to 'Grass Roots' rugby.  Different skills, different strengths, etc.  Referees use something called 'Contextual Judgement' and 'Materiality' when refereeing games of different level, to keep the game flowing and allow some rugby to break out.

Technically if anyone moves the ball with their hands once a ruck has formed over it, then they are breaking the law.  However sometimes this is ignored, why?

If the ball has been cleanly won and the contest for the ball is over, then why would the referee penalise someone moving the ball a little bit, to make it easier for the Scrum Half to play the ball and keep the game flowing?

At the average breakdown there are around 40+ potential penalties that the referee could give.  Which means that if he refereed the game to the 'letter of the law', you would only need a pitch a few feet square, as he would be blowing the whistle every few seconds.

However that wouldn't be much fun, for the referee, the players, or the spectators.  So the referee uses his judgement and materiality to find ways 'Not' to blow the whistle, to keep the game flowing.  He looks to only blow the 'clear and obvious'.

Where is the line between materiality and ignoring the laws?  That is for the referee to judge.  It's part of what makes our game so great.

Norman, The Rugby Ref doesn't remember the exact incident you mention, but hopefully the above explanation goes some way to answering your question?

Don't forget, if you have a question for The Rugby Ref, just email it in, using the "Ask The Ref" link top right.

A revisit to meal No 13 and The Rugby Ref had the same again.  There was however a choice this time of Sausage or Sausage Roll and Chips, Chilli and Rice, or Chilli and Jacket Potato.

The Rugby Ref gives this another solid 9 out of 10. 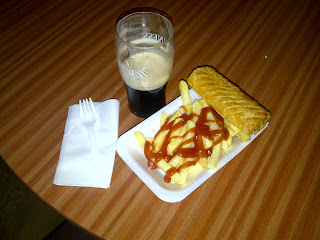 But the food consisted of two large plates of hotdogs placed out in the club.
By the time The Rugby Ref and some of the players got there; it was all gone.
The Rugby Ref was given a pint of Guiness.......but it was warm. 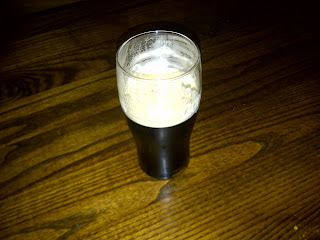 Curry, curry and more curry.
They all looked the same, they all scored 7 out of 10.
They all came with a pint of Guiness.
Posted by The Rugby Ref at 14:36 No comments: