Can you please advise / comment on the above Law.

Watching Tuilagi at the weekend where his top was covered in blood. It surprised me that the ref took no action and on the contrary the Sun run an article on it praising him for playing on with blood all over his top.

4.4 BANNED ITEMS OF CLOTHING
(a) A player must not wear any item that is contaminated by blood.

The Rugby Ref has no idea why that Law would be ignored, after all it's not as if they would be short of shirts?  But then there are a lot of things that happen at the top level, that The Rugby Ref doesn't understand....and which would not be allowed at the Grass Roots Level of Rugby.

Offside at a charge down.

An argument arose as follows in a recent Premiership game. An opposing player kicks the ball. This was charged down by a home player. A second home player is several metres in front of the charge down and then picks up the ball. The referee blows for a penalty for offside.

The argument was ' a player cannot be offside from a charge down' . The premiership ref gave two penalties in the match (one to each side) for the same offence.

The question seems to be Law 11.3 that when a player kicks the ball this puts the home player onside but this seems then to be counteracted by the home player who charges down the ball putting the penalised player back offside?

Thanks for a very interesting question.
To help clarify this we need to take a step back and look at offside in open play. Let's look at the definition of offside.

Definitions
At the start of a game all players are onside. As the match progresses players may find themselves in an offside position. Such players are then liable to be penalised until they become onside again.
In general play a player is offside if the player is in front of a team-mate who is carrying the ball, or in front of a team-mate who last played the ball.
Offside means that a player is temporarily out of the game. Such players are liable to be penalised if they take part in the game.
In general play, a player can be put onside either by an action of a team-mate or by an action of an opponent. However, the offside player cannot be put onside if the offside player interferes with play; or moves forward, towards the ball, or fails to move 10 metres away from the place where the ball lands.

The second paragraph is the one we need to look at. "A player is offside if he is in front of a team-mate who last played the ball".  So when the charge-down occurs, any team mates of the charger, who were in front of him when he charged-down the ball, are offside and liable to penalty if they take part in the game.

Think of it this way (and this is a simplistic rule of thumb), you can only be offside in open play if your team have the ball (or last played it) so when the ball is kicked, only that team can be offside, but when it is charged-down, it is now only the chargers team who can be offside.

So Ed, in your example, the referee was correct, the player in front of his team mate who charged down the kick was offside, and penalised for taking part in the game by playing the ball.

As usual, you need to read more than one piece of law to get the full picture.  In this case the definitions for Law 11, and Law 11.4(f).

Great question Ed, and thanks for posting it.
The Rugby Ref

What is wrong with this picture? 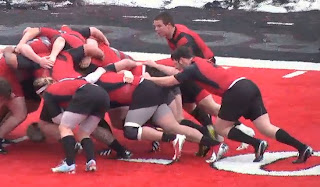 Thanks for sending in the question and photo.
It is always hard to answer questions like this from a still photo, however lets have a go.
The number 8 and the far side flanker both appear to have broken their binds.

Unfortunately The Rugby Ref finds it impossible to answer that question from a still photo.

Drew, maybe you could answer your own question and fill in some blanks?

Edit: As has been pointed out in the comments, two teams in red, on a red pitch!!!

The Rugby Ref has a new watch.

For Christmas The Rugby Ref got a new watch.  the Spintso Referees watch is specially designed for referees and has lots of useful features. 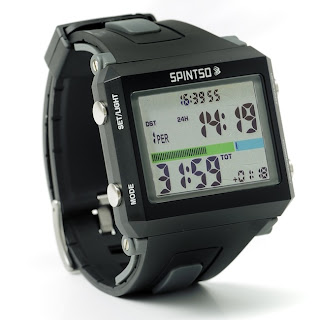 Spintso stands for Sports Intelligent Solutions, and they claim that their new watch is the "smartest referee watch in the world".

The watch has three modes.  Standard watch, stopwatch, or the special referee match mode.  In match mode the watch has a number of special features that make it a very valuable tool for the referee.

At around £90 this is not a cheap watch, but if you are serious about your refereeing, the The Rugby Referee highly recommends it.