This weeks meal was a small burnt sausage in an over-sized bun with some onions.  This was accompanied by some "crispy" french fries.  The Rugby Ref had to smother them in ketchup to soften them up.  The whole thing came on a paper plate.  In it's defence the meal was hot and filling, and was partnered with a very nice pint of Guinness.

Using last weeks chili (5) as a benchmark, The Rugby Ref scores this weeks fare 4 out of 10.

While both meals so far have scored low, they were both gratefully received after a good hard game of rugby.  The Rugby Ref is however hoping for some higher scores as the season progresses. 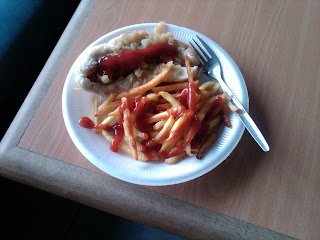